Romanian inflation accelerated in January to the fastest pace in 20 months as the weakening leu increased the cost of local services, including rent and phone bills, many of which are priced in euros. The annual rate rose to 7.3 percent, the highest since May 2006, from 6.6 percent in December, according to data released by the Bucharest-based National Statistics Institute earlier today. Consumer prices rose 0.9 percent month on month, compared with a gain of 0.6 percent from November to December. 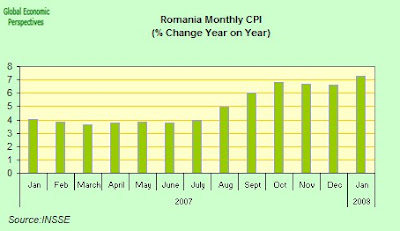 The National Bank of Romania, raised its main interest rate 1 percentage point to 9 percent only last week, and is becoming increasingly concerned the inflation rate may rise to over 8 percent in the coming months because of the weakening leu, wage increases, a consumer lending boom and increased government spending.

The leu has droped almost 13 percent against the euro since last August, and this has made goods and services indexed in foreign currencies more expensive. In Romania, telephone bills, gas, rent and other items are quoted in euros and paid in lei. 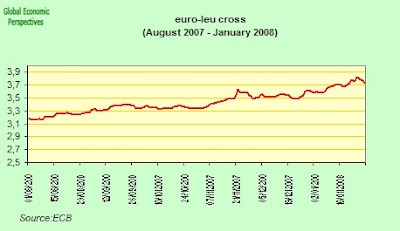 In January, rents rose an average of 1 percent from December and phone bills increased 4.4 percent, the INSSE said.

The central bank, which has now raised its main interest rate at three consecutive meetings, is likely to continue raising the rate in the future, and some economists are even forecasting that they may continue until it reaches 10 percent. The central bank's next interest rate meeting is on March 26.

One of the difficulties is that policymakers are treating this problem as if it is merely cyclical, whereas I fear it is structural, and that getting 6 percent inflation-free annual growth rates may be near impossible now in Romania due to the severe problems of lack of labour.

Of course, predictably the leu rose on the news, climbing to 3.6232 against the euro by 3:54 p.m. in Bucharest, from 3.6513 yesterday. If the currency movement was the main inflation issue, then this would provide a kind of automatic stabiliser mechanism raising the leu and damping inflation. Unfortunately, as I keep saying, my own view is that the problem is much deeper, and the real difficulty is that what is happening now is a kind of lock-in risk premium, whereby it may well prove very much more difficult for the central bank to subsequently lower rates than it is now proving to raise them, in which case the Romanian economy could soon find itself set on the course on whicb the Hungarian one has already embarked.
Posted by Edward Hugh at 6:39 AM No comments:

At last some (slightly) good news. Romania's trade deficit was smaller in December 2007 than in December 2006, recording the first such drop since October 2004 as the weaker currency and rising industrial capacity boosted exports and discouraged imports to some extent. 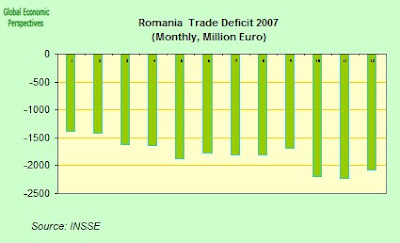 Romania's leu has depreciated almost 14 percent against the euro since August as international investors have grown increasingly wary of areas seen as high risk amid mounting concern over the U.S. and global economy. The leu had been among the world's top- performing currencies in the previous two years, making imports cheaper for Romanians.

Imports in December rose an annual 6.5 percent to 4.3 billion euros, while exports increased 15 percent to 2.3 billion euros. Imports from other EU countries rose 7.63 percent as exports to the region increased 17.6 percent. So what is most pronounced about the reduction in the December deficit is not so much the continuing rise in exports, but the sudden drop in imports. It is too soon to say what lies behind this - is, for example domestic demand faltering for some reason - as it seems to be to sudden to be a simple question of the currency movement alone. However we will have to wait for more data before we can really see anything clearly here.

The trade deficit is the main component of Romania's current- account gap, which widened in the first 11 months of last year to a record 15.29 billion euros. Fitch Ratings and Standard & Poor's have lowered their outlooks on Romania's credit rating in recent months, citing the growing current-account gap.
Posted by Edward Hugh at 4:25 AM No comments:

Romania's central bank unexpectedly raised its benchmark interest rate a full point, the third consecutive increase, as inflation threatens to accelerate and the local currency weakens. The central bank increased its Monetary Policy Rate to 9 percent, the highest since 2005, from the 8 percent level set on 7 January 2008. This is now a very strong monetary tightening process. 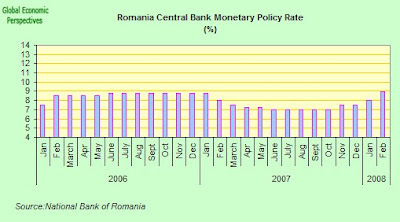 The bank will ``continue to pursue a form of management of money-market liquidity'' and adopt ``higher provisioning for foreign exchange-denominated credits extended to unhedged borrowers,'' it said in a note about the decision.

Net monthly wages rose an annual 23.5 percent in November and private debt increased an annual 60 percent in December, most of it in euros. 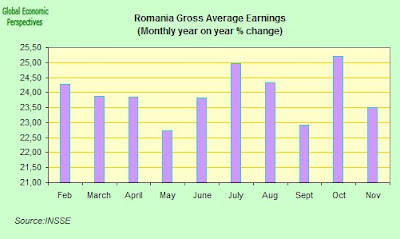 More to the point on the debt front, household borrowing in foreign exchange denominated debt (largely euros) rose at an annual rate of 134.4% in December.

Central Bank governor Mugur Isarescu has repeatedly warned that rapid increases in euro-denominated loans pose risks to borrowers as a weaker local currency could increase their borrowing costs. Basically this situation places a limit on the central banks own monetary policy to put a break on credit expansion, especially if at some point the ECB starts to reduce rates.

Surprisingly this news of central bank rate increases due to strong inflation is pushing the leu upwards, and the currency advanced to a more than three-week high against the euro this morning on speculation the central bank will increase interest rates by half a percentage point to 8.5 percent later today. 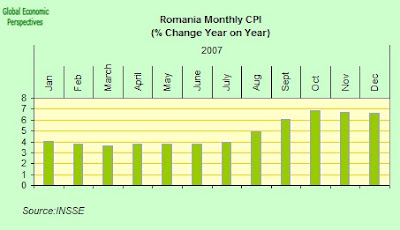 This effect is very counter productive, since it raises a real excahnge rate which is already being pushed up by the inflation itself, only serving to deteriorate further and already battered trade deficit as exports become more expensive and imports cheaper. We could call all of this the perverse consequence of traditional monetary policy in the current environment.
Posted by Edward Hugh at 3:59 AM No comments:

Inflation and the Leu

The Romanian government authorised an increase in the price of natural gas by 8.5 percent as of 1 February 2008. According to an article today in the Romanian newspaper Ziarul Financiar this could push up food prices significantly, starting from as early as this month. Food prices, which have been one of the drivers of Romanian inflation since a drought destroyed crops last year, may rise by as much as 0.7 percent simply as a result of the gas price rise the newspaper said, citing unidentified Finance Ministry officials.

Surprisingly this news of possible increases in inflation is pushing the leu upwards and the currency advanced to a more than three-week high against the euro this morning on speculation the central bank will increase interest rates by half a percentage point to 8.5 percent later today.

This effect is very counter productive, since it raises a real excahnge rate which is already being pushed up by the inflation itself, only serving to deteriorate further and already battered trade deficit as exports become more expensive and imports cheaper. We could call all of this the perverse consequence of traditional monetary policy in the current environment.
Posted by Edward Hugh at 2:16 AM No comments: