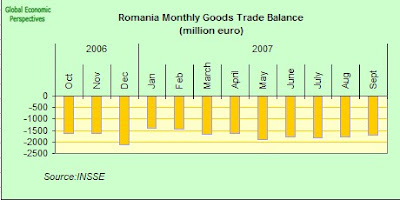 The trade deficit is the major factor widening Romania's current-account gap, and concern about the widening CA deficit lead Standard & Poor's to recently lower its outlook on Romania's sovereign credit rating for a second time since April.

In the first nine months of the year, the trade deficit widened to 15.07 billion euros from 9.55 billion euros in the same period of last year. Imports increased 27 percent and exports rose 11.7 percent.
Posted by Edward Hugh at 5:31 AM