Romanian Leu on the Slide

Following on from my last post on the leu, here's the latest 24 hour chart on the euro-leu cross. 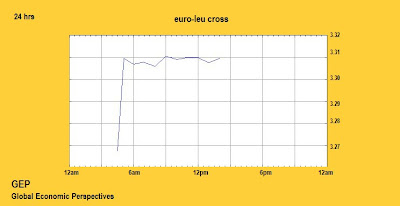 Analyst Lars Christensen at Danske Bank has also picked up on what has been happening to the leu, and has published a research note which I reproduce below and the substance of which I basically agree with at the analysis level, although I am not, of course, recommending anyone to buy or sell anything.

Since the beginning of July, the Romanian leu (RON) has weakened significantly. However, we see room for significantly more weakness in RON and therefore recommend to Buy EUR/RON spot.

We give the following reasons for more RON weakness:

• The Romanian economy is among the most imbalanced economies in the Emerging Markets universe, with overheating asset markets, excessive credit growth and a large current account deficit. We place Romania in the same “group” of countries in CEE as the Baltic states and Bulgaria in terms of heightened risk of a hard landing in the economy and financial distress. However, while there are currency pegs in the Baltic states and Bulgaria, there is a floating exchange rate in Romania. Hence, the leu is the easiest case to trade if one wants to trade the case of overheating in CEE.

• Fiscal policy is strongly pro-cyclical and hence contributes to increasing imbalances in the economy. The political situation remains uncertain.

• After the recent rise in FX volatilities the key policy rate in Romania of 7.0% does not give any real protection in terms of carry-to-risk.

• The large Romanian funding needs – due to the high external imbalances – make the Romanian markets and economy sensitive to a global credit crunch.

• Romanian households to a large extent have funded real estate investments in foreign currency (mostly EUR and CHF) and that makes them very exposed to currency risk.

• The leu is the most overvalued currency in our entire Emerging Markets universe. Some of our models indicate that RON could be overvalued by more than 30% on a fundamental basis.

• Technically, we have broken the nearly three-year downtrend in EUR/RON and a new uptrend has been established. According to our technical analysts, EUR/RON will meet resistance around 3.40.
If this resistance is broken then the next resistance level is around 3.55.

How would you compare the leu against the USD currently. I am an American livingi in RO and have seen the leu drop from 2.85 when I moved here to 2.3 now...about a 20% decline in my purchasing power.

This is very hard to say. The thing is the financial markets turmoil is about to drop back into second place in the picture, and macro economic fundamentals are about to move to centre stage. Eastern europe has important demographic structural defects which make balanced growth hard to achieve.

There are - for example - half a million Romanians working here in Spain where I live. Also there have been relatively fewer young children born since 1989, so there are now going to be far fewer young labour market entrants. In this environment it is hard to see how they can get inflation free growth. This is hwta we are seeing in the Baltics, in Poland, and in Romania.

In addition, Spain may well be one of the worst afffected by the longer term impact of the US sub prime thing, since construction has been such a big part of the Spanish growth story in recent years. So the flow of remittances - look at Mexico and the US right now - might seriously reduce, just to add to the problems and weaken the leu further.

Romania is not as strong as Poland, and doesn't have a peg like the Baltics or Bulgaria, so my guess is it will take the hit, when it comes, full face. Then we will see whether the pegs will hold elsewhere.

Otoh, since all of this is going to be very bad news for the eurozone, and hence for the euro, by default, I would say, the dollar has to rise.

So if you have fixed income coming from the US, my guess is that you will be one of the few beneficiaries of all this. Of course, the quality of your life might change, since you will have to look out of your window at all that is happening around you.

But this, I would emphasise, is a personal view.